Recently, the Contentious-Administrative Chamber of the Supreme Court handed down Decision No. 53/2020 of 22 January, which, from a practical point of view, has limited the right of persons who are to be compensated by the public authorities to assign their claim until a final administrative act or a final judgment has been issued recognising it.

Without it being possible, nor should it be possible, to disregard the proper weighting of the general interest in any judicial dispute affecting a public administration, we consider that the Supreme Court has handed down a judgment which, rather than being conservative or protective of public interests, is going to do considerable damage to the Spanish economy and, in particular, to the competitiveness of our companies.

Clearly, an opportunity to innovate to help Spanish companies generate wealth within the legally established framework has been lost.

On the contrary, not all the general interests affected by the judicial controversy have been weighed up, having opted to seek a solution exclusively anchored in the institute of asset liability, perhaps simplistic, which leaves the economic consequences of the judicial ruling in its just extension unevaluated.

In fact, claims arising from government liability are assignable in many other foreign jurisdictions and, therefore, foreign companies will be able to achieve early monetization of their claims and obtain additional economic resources with which to compete in increasingly global markets to the detriment of Spanish companies. They will have to keep waiting, “often armed with patience”, for the existence of a firm administrative act or a firm sentence in order to be able to yield and monetize their credit.

Without doubt, the general interest also requires that channels be found to unblock the billions of euros currently affected by litigation in Spain.

Therefore, it would have been desirable to start with the basics: not to create jurisprudential impediments to cases not prohibited by the law.

We recommend reading the Judgment and the particular vote which is in line with our commentaryand which expressly mentions the existing practice in Anglo-Saxon countries.

Despite the court ruling, it is encouraging that there are already Supreme Court Magistrates who perceive the need to contribute to the revitalization of litigious assets where litigation funds should play a major role.

And, for those who are interested, our litigation fund will surely be able to provide solutions within the legal framework to those Spanish companies that cannot be armed with patience until the monetization of their credit.

Read in Our Blog BENEFITS OF LITIGATION FUNDING

Otras entradas
LITIGATION FUNDING IN UNCERTAIN TIMESFernando Gragera11 May, 202014 May, 2020

Litigation funding in uncertain times. On April 28, the Spanish Council of Ministers approved the... 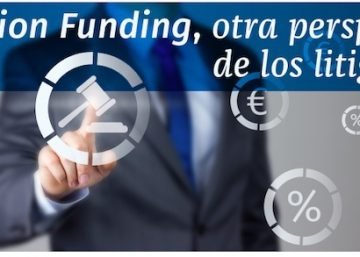 Acquisition and Litigation Financing. On April 22nd, our CEO participated in the Seminar organized by...

Any cookies that may not be particularly necessary for the website to function and is used specifically to collect user personal data via analytics, ads, other embedded contents are termed as non-necessary cookies. It is mandatory to procure user consent prior to running these cookies on your website.